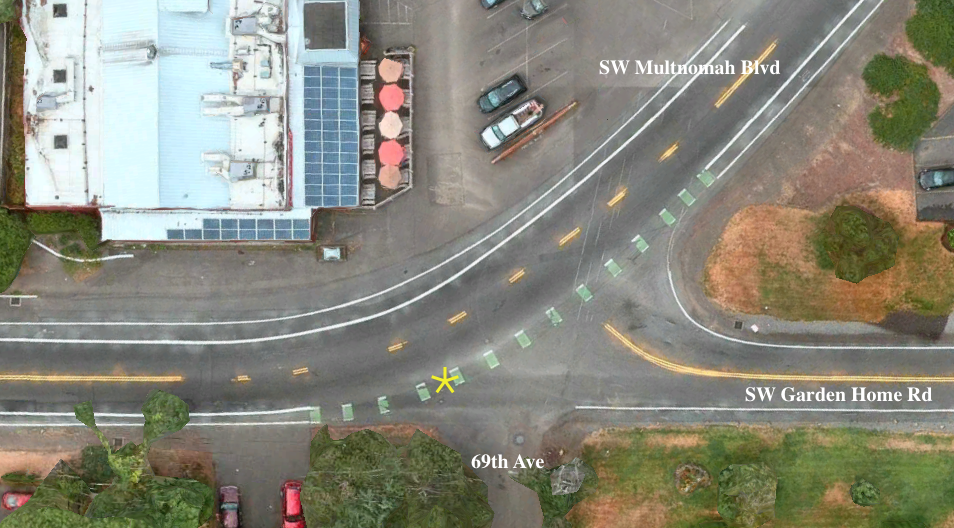 On October 15, a 42-year-old woman claims that a driver met her as she was cycling home after a trip to the grocery store. The crash happened at an intersection well known to transportation activists and the Portland Transportation Bureau (PBOT): Southwest Multnomah Blvd and Garden Home Rd.

BikePortland wrote about a project to improve safety at this intersection in 2018 and 2019. In one of these stories, we caught up with Eric Wilhelm, a Southwest Portland resident and bike advocate:

Wilhelm (like many others in our community) is tired of waiting years for repairs at intersections which are well known to pose imminent dangers to bicycle users. “It has been almost three years since Kurkowski was killed here, without any changes.”

It has now been five years since Kurkowski was killed. And repairs to the intersection that once seemed imminent still haven’t happened. The delay was almost fatal for Kwen Peterson, the woman who said she was beaten there on October 15. Here is his story:

Around the 4th or 5th green dash, I saw the side of a blue Prius that tapers behind me and slides out to the side. Most of the force entered my saddlebags loaded with groceries and pushed me to the right.

It was Friday October 15 around noon, a sunny day. My bike is hot pink, my classic ortlieb saddlebags are pink, my pants are red with black polka dots, my hi-vis yellow jacket with silver reflective stripes is on, and my red tail light is flashing. Yes, I look like a circus clown on parade.

I was traveling on SW Multnomah going east and the road curves north. As I approached the curve, there was no car in front of me and I had not passed any car since I had entered from 71st place. As I entered the curve, I glanced to my side about 90 degrees, but not behind me since I was following the main road – it was clear. My approximate speed is only around 10mph since I’m packing 25 pounds of groceries. Around the 4th or 5th green dash, I saw the side of a blue Prius that tapers behind me and slides aside. Most of the force entered my saddlebags loaded with groceries and pushed me to the right. My bike crashed on the right and I fell off the bike on the left side.

My helmet was cracked near the base of my skull on the left side and the right rubber grip of my bike was chewed up by the road otherwise no permanent damage was caused. My left elbow, hip, shoulder and knee all have a rash and are bruised.

The driver just behind the Prius stopped traffic with her vehicle and pulled my bike off the road. Another driver helped me from a lying position and on my feet and in the bushes at the corner of 69th ave. The owner of the Prius then came down Spring Garden from where she had parked her car. I refused three times for an ambulance to be called.

So what happened? The Prius driver explained that her elderly mother had been run over the day before and was in hospital with a possible hip fracture and was on her way to visit him. She claims that she noticed me from a distance, but as she approached from close behind and to the side, she forgot everything about me. She said she was too emotionally distracted.

I guess because the road is very wide and goes straight up the hill from Spring Garden, this driver’s eyes are looking far towards the crest of the hill. I was literally forgotten.

So no signage, no paint stripes, no daytime clown costumes, no flashing lights or traffic slowdowns were enough to prevent this incident. More must be done. The Portland Transportation Bureau knows exactly what the problems are and how to fix them. I would raise my hand to enthusiastically vote for the funding, except my arm is too bloody and bruised.

(We attempted to verify this story with a witness and the driver (both provided by Peterson), but were unable to contact them.) 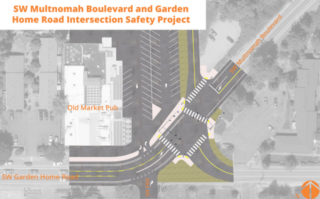 The intersection has a new design (above) and a project site, but the project seems to be at a standstill due to lack of funding. According to the website, the “project received $ 1 million from the Washington County MSTIP and $ 1.2 million from the costs of developing the City of Portland’s transportation system.” PBOT is actively exploring additional financing options. 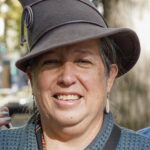 – Lisa Caballero, [email protected]
– Receive our titles in your inbox.
– Support this independent community media with a one-off contribution or a monthly subscription.